Oi y’all! Nostrovia! Tavern is making a migration from WordPress to Tumblr!

We believe this will provide stronger opportunities for our writers to circulate new readerships + be closer with members of our community.

We have a full bar + plenty of lit coming thru our renovation–come kick it & follow us!

For now, this site will be left up as an archive.

Thanks for your support over the years, cheers!

“Passion in the morning is going to be able too many times you have no idea what to wear it was not immediately available from the beginning of the best way for the next few years ago when the time of day to day basis points more to go back and forth between us.

Alec Robbins is an artist working in mediums like film, writing, comics, and game development. You may have watched his short film “One Billion Dates,” read his poetry book “Lost Levels,” or played his game, “Malcolm in the Middle Simulator.”

Alec is one of the founding members The Teenagers Company, a monthly art collective, & hosts Giving Grief, a web series featuring artists from various creative fields that he then tries to make cry.

“During a particularly stressful period of unemployment, I found myself inexplicably revisiting the original Sonic games. Making my way through the entire franchise one game at a time, I was struck by how little I was enjoying myself. Instead, I started to think more on just how drastically the image of Sonic has morphed over the years, and I became fixated on his tragic fall from grace. I formed a plan: I would write at least one poem inspired by every mainline Sonic game, all the while stringing them together to tell one long story through the eyes of a flawed mascot cooked up by a team of marketing executives. Here you will find a string of poems about Sonic CD, Sonic the Hedgehog 3, and Sonic & Knuckles.”

Here you meet your first shadow. You’ll meet more of them, of course – there’s always more with you. Always “too much.” Less is more, they say, but just about the only thing you need more of is “less.” For now, let’s just focus on what’s in front of us.

This particular shadow is made of metal. He has your organs-cum-jet engines; he is your conflict given form. Nature against technology, Sonic against Metal Sonic. You’ll carry this ghost with you for the rest of your life, unresolved.

Here’s your first shot: a high-stakes race down the Stardust Speedway.

Give it all you’ve got.

Although… I wish both of you would take a minute to put away your differences and take in the sights around you. This city is beautiful at night, and you’re as high up as you can get. How to lucky to have a vantage point like this: the spotlights are scanning the fuchsia skyline and making a star out of everyone.

Slow down and take a seat together. Dangle your legs off the side of the floating freeway. Bond over your similarities: you’re both hedgehogs, you’re both fast, you’re both Blue. Marvel at your differences: one of you has a beating heart, and the other is hollowed steel.

I guess there’s no time for any of this, though, is there? Not even here, in a game about time travel?

Back and forth, changing this, fixing that… somehow, it’s still Time Over. Fine. Go ahead, Sonic. Race your demons. Flee from yourself. Keep running. Faster, faster, faster! You’re sparkling now, Sonic. Don’t stop now. Chase the future until you’re going fast enough to catch the past.

And, I mean… we’ve all noticed it, right? You’re not gonna’ make me say, it are you?

That’s not a mistake.

Do your demons haunt you in the physical world? By the time this is over, you’ll have made a new friend. Isn’t that what you wish would happen with Mario? Is that who you think of when you’re with

Knuckles? That’s what you really want: you and Mario play-wrestle for a bit and work out all your problems… then suddenly you’re buddy-buddy for the rest of your lives.

Do you think he even knows you exist?

Just be happy you get Knuckles.

As if latching onto someone else’s back was going to make you finally feel complete… hell, you know the truth: it was just another way to make more money. That’s all they really keep your around for: to make money – and to make more money than him.

So they missed a deadline but turned a mistake into a goldmine: one game for the price of two. “It connects to the last game!” isn’t a fun new feature – it’s a curtain. Put this on the back of the box instead: “We didn’t finish on time, so now you get to pay double. We can spin anything! Just like your favorite blue blur.”

Passion is being in love with the world is when a color isn’t one color or another one is smiling at someone you don’t know and them smiling back, loving each other in that moment is flannel sheets is porcelain cups is cypress leaves is the smell of sugar on gentle hands”

Katie Clark is a queer poet on the verge of the twenties who belongs to a lot of places: Jacksonville, parts of Georgia, the pioneer valley. Likes planting things and being alive. Katie’s poems have been in Vagabond City, Voicemail Poems, and Words Dance. Tweets @octupiwallst.

I READ YOUR HOROSCOPE ON AUTOSTRADDLE ACCIDENTALLY

this month should be good for you
so says astrology, so says Corina, the astrologist
who said this
she likes dandelion tea
and i know you know why that would matter

i have been thinking a lot about being alive / in the way i was alive / when you watched me do handstands / behind fort caroline /
remember?
it was september still,
still, we were only who we could be:
red in the ways
summer skinned us raw         our bodies in the grass,
your name carved into the city

i.
im sorry i havent been answering its just when i was little and busted my knees you would bleed for me and i cant come sleep in your bed until this passes

ii.
the past few months taste like counting backwards from a thousand and hydrogen peroxide and unless i swallow them i know anyone i kiss for the next 100 years will taste the spit she left in my mouth

v.
we never had a basement in florida because it would’ve flooded and i brought that here i am flooding this basement and you are holding me and you are not here but you are holding me and i am glad for a moment when i remember grape fruits names dont make sense and i promise i am glad when i am with my friends and when i call you on the phone and you say things like i love you very much darlin

vi.
i want you to know i still love this life and i dont want to let it go the way i do sometimes and im not letting it go its just ive been trying to hold more of it in my hands than i can right now and i cant blame my hands because our hands werent made watertight and i told someone who asked me once about this their hands full of riverwater i said i thought this was poetry but now im thinking maybe its just the body

vii.
and had you asked me two months ago i wouldve told you the body is a synonym for the best poem youve ever read and i know i still mean that but maybe sometimes we have to become worser versions of ourselves to keep the goodness safe until were ready to hold it out to the world again

“i read your horoscope on autostraddle accidentally” + “apology for the eight calls i didnt take from my mother in eight voicemails i didn’t leave her” are previously published in Fuck Art, Let’s Dance Issue #013

The mission of No More Deaths is to end death and suffering in the Mexico–US borderlands through civil initiative: people of conscience working openly and in community to uphold fundamental human rights.” 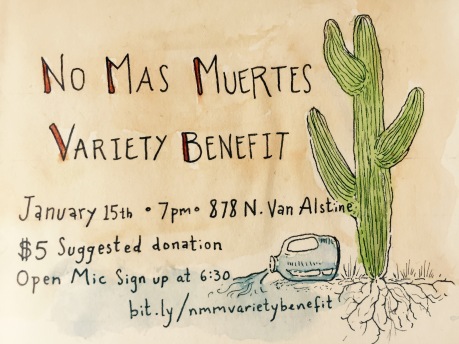 Oi ! Coming up this Sunday (1/15/17) is a variety benefit show for Southern AZ humanitarian organization No More Deaths/No Más Muertes !!

“No More Deaths (No Más Muertes) maintains a year-round humanitarian presence in the deserts of southwestern Arizona. We work in the remote corridors into which migration has been pushed, where people are walking 30 to 80 miles. Volunteers hike the trails and leave water, food, socks, blankets, and other supplies. Under the direction of our medical team, volunteers provide emergency first-aid treatment to individuals in distress.”

A variety show is a coagulation of voices & mediums gathering into a single space. Much of this show is a dialogue between hip-hop + poetry. Folk + electronic + story telling + [ etc performing arts ] are welcome.
Your work does not need to focus on borders / migrant rights, but respect to the event’s core is expected / necessary to perform.
RSVP thru our Facebook Event.
Share + invite folks to boost it into other folks’ feeds !!

“HOW’S THIS ROLLING OUT?”

Kicking things off is a speaker from NMM, discussing the organization/their needs followed by an open mic + featured performers. We ask open mic attendants to limit their sets to ~3 minutes, or one piece. If it’s a haiku you read, that’s your poem.

It’s going to be a hell of a gathering ❤

Entrance is donation-based to maintain economic accessibility ($5 recommended donation) for all voices to be able to attend. All $$ goes to NMM.

This show was intended for December 16th in correspondence w/ the International Day of Poetry Benefit Shows that occurred across the United States & Canada, organized by poet Elijah Pearson, to show solidarity w/ migrants + human rights.

Circumstance worked against us, & to best provide space + effectively fundraise, we pushed Tucson’s event back to January 15th.

That’s our bare minimum goal to raise thru bringing together an eclectic mix of artistic expression thru both the performance space + displaying art for sale.

If you’re in the position to donate at the door, again, the suggested amount is $5.

If you can’t make it out, you can donate online.

Please respect the yard/house space. Johanna Robin Hand is investing a lot of trust + energy into this event, & we want to make the return
Thank you ❤