The story goes that two neighborhood cops
pulled me out of my mother
when I was born. Perfect emergency.”

from “Make a Fist & Tongue the Knuckles” by Emily O’Neill 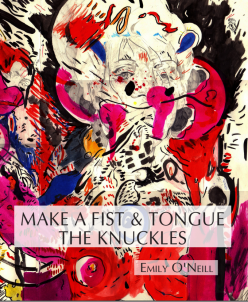 “People keep themselves to themselves. Sometimes they share in America’s weird lands of Florida. The secrets of that humidity are hot with heat. Lies rest themselves in the atmosphere convincing residents of Florida that it is a fine place to live, probably the biggest lie that Florida ever told besides pretending to have an economy, yet another lie. Bends of the truth and ankles are roughly the same thing at times as the truth gets dressed up made to look so lovely.

States of snow tend to be bitter. The cold does that to people. Freezers there try to replicate the exquisiteness of eternity, through vast fields of snow. Up from the sky the clouds consider the snow to be candy, sugars thrown at people. On the ground they accumulate trying to take up as much space as possible. Luck has a lot to do with this phenomena and many more. Poverty does not have any luck built into it. Cruel, it becomes crueler with social norms that dictate why people are poor, things about laziness, about not working hard enough or smart enough. While they try to hide there is no place to hide from the police when one is poor. America refuses to allow comfort to its poorest citizens opting to pass legislation against them instead.”